When we think of women who become surrogates, we think of selfless women giving the ultimate gift of a family to individuals and couples

But the experience couldn’t have been more different for a British couple in Australia recently.

Steven and Marc Winchester-Horscraft both nurses, paid a surrogate in Australia almost £17,000. When the surrogate confirmed she was pregnant with twins, the couple, who already have a child from another surrogate, were so excited at the news and how their daughters would complete their family.

But the twins were born prematurely, at 28 weeks, and it was then that things really took a turn for the worst

Not only did Steven and Marc have to deal with the upset and worry of having their daughters in an intensive care unit, but the surrogate and her boyfriend began demanding more money.

After visiting their daughters in intensive care one evening they were paid a visit by their surrogate’s boyfriend, who said that in order to put Steven, who is the biological father, on the birth certificate, they would need to pay another £3,000!

The couple didn’t have the money at the time, and the surrogate went ahead and renamed the twins and named her own partner as the father, refusing to hand over parental rights

As Steven says, “having our girls in NICU was only the beginning of our long, excruciating nightmare”. A bitter legal battle ensued, all whilst the girls were still in the high dependency NICU department in hospital. Just as the first hearing was about to be heard, the surrogate instructed the hospital to stop Steven and Marc seeing their daughters.

“Imagine not being able to know anything about your sick, premature, new born children. At this point we didn’t even know if they were alive”.

In order to take legal action, Steven and Marc had to take out loans of around £26,000

A DNA test confirmed that Steven was the biological father and after a long six week process, the couple were given legal custody of their daughters. 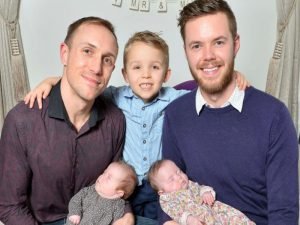 After dedicating their professional lives to looking after other people the couple have been left emotionally and financially broken. So they’ve set up a GoFundMe page to ask for help from others to help them recoup their financial loss that was so unnecessary and unjust.

What a heartbreaking story! Have you been through anything like this or do you know anyone who has? If yes and you would like to share your story, we would love to hear from you at mystory@ivfbabble.com

Read what our experts are saying