Karina Rincon, 32, and Kelly Mesa, 31, are both originally from Venezuela and knew each other in school. They moved separately to the United States and reconnected in Miami. Having only dated men in the past, it was a shock to both of them that they soon fell in love.

Karina says, “Whenever I’d hear Kelly talking about boyfriends, I’d feel almost jealous and started to realise that it was because I had romantic feelings for her… I was so nervous, as I had no idea how she would take it, but I had to tell her how I felt. Thankfully, she felt the same.”

At first, they planned to keep their love secret from their family, but came out to them in 2017, and soon married

They wanted to have children but knew that they couldn’t afford the high costs of fertility treatments. The costs were adding up quickly, Kelly remembers. “Some of the clinics we looked at would have cost thousands and thousands – and that was just to find the donor.Then, there’d be all the costs of insemination, medication, doctors’ appointments and so on.”

They soon found a donor matching site selling at-home insemination kits online for $89 (£72). They really didn’t think that the method would work, especially without medical assistance, but they decided to give it a go. 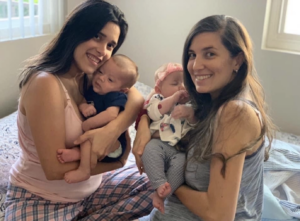 Kelly soon found out that she had been offered a job in California, and would no longer be able to get fresh sperm from the donor they had selected

On a whim, the couple decided that they would both undergo insemination so that they could double their chances before the move.

Less than 2 weeks later, now settled into their new home, Kelly and Karina took pregnancy tests, and were stunned when they both turned positive. Karina was over the moon. “We took some more tests which confirmed it. We were both expecting, and around four weeks along. We couldn’t believe it – what were the chances?”

Leo and Sophie, who the couple refers to as “almost twins,”were born just 3 days apart in July, 2019

Karina and Kelly were relieved that there was a small gap between births. “I’m really glad we didn’t go into labour at the same time. That was a worry of ours, but thankfully, being three days apart meant that I could be there when Leo was born, and Kelly could when Sophie was.”

While people expected that pregnancy hormones would mean they would be at each other’s throats for none months, Karina says it was just the opposite

“Actually, it was great to go through this with the love of my life, who completely understood how I was feeling. The only difficult thing was sharing a bed with two ginormous bellies and both of us wanting to pee every five minutes!”

We could not be happier for this couple and their gorgeous babies. Congratulations!